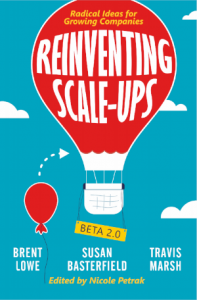 The following is an excerpt from the book Reinventing Scale-Ups: Radical Ideas for Growing Companies by Brent Lowe, Susan Basterfield, and Travis Marsh.

The book explores progressive organizations that have developed new and unique ways of growing their people along with their business. Fitzii is honored to have been profiled in the book and particularly in this Chapter 6: Matching Strengths to Needs, where our Role Advice Process is described more eloquently than we ever could have.

Work needs to be done. You trust the members of your team to do that work. On the surface it’s simple matchmaking. However, experience tells you the reality of organizational productivity is far more complex.

It can be like trying to assemble a puzzle in which both the picture and the shape of the pieces keep changing.

What if there was a panacea for overcoming these challenges? Edwin Jansen at Fitzii, a 15-person (and growing) recruitment solution for small companies, believes there is. His answer: remove yourself from the role of matching people to jobs.

The greatest challenge in this model is the inability of leaders to be mind readers. If only we could look deep into everyone’s soul and extract the relevant information. What do they love to do? What do they do best? How are they motivated and demotivated? Unfortunately, busy leaders have neither the time nor supernatural ability required to sufficiently answer these questions.

The most powerful and the most overlooked source of total motivation is the design of a person’s role within an organization. Often, jobs are designed entirely around tactical performance. We have a strategy. We turn that strategy into a process. We then write a job description to execute that process. Rarely, however, do we craft a role that inspires total motivation and adaptive performance. Poorly designed roles can make it almost impossible to create a high-performing culture.

Over the last two years, Fitzii has adopted an approach they call the “Role Advice Process” or “RAP.” Fitzii is self-managed and chooses to work without traditional management structures, so there is no one person responsible for designing roles or managing team performance. As a result, they need a way to work through role-based issues within a self-management scaffolding. The RAP has become a core element of how they operate as a company. Since being implemented, the process has had a dramatic impact on the team.

In essence, the RAP is a way of crowdsourcing the design of a role. A broader set of opinions help align the needs of the business and the strengths of the individual. Think about your role for a moment. Could you increase your impact and engagement if you redesigned your role? Through the RAP, you define the set of tasks best aligned with your strengths and things you enjoy.

Does this mean you get to drop everything from your plate that you don’t enjoy? It does not. At least not until someone else pulls those tasks into their role. Reflecting back on the puzzle analogy, the puzzle is complete when there are no holes. Holes can be filled in two ways. The first is to reshape the current pieces of the puzzle to fit. The second is to hire a new puzzle piece. If the perfect puzzle piece does not yet exist, someone needs to step up and fill that hole.

The process begins with an individual’s desire for input into the design of their role. Sometimes it’s prompted by the individual themselves. Other times, a colleague may suggest the individual initiate a RAP because they have noticed a significant problem or opportunity.

Step 2: Announce the Start of a RAP

The individual declares to the team they are starting a RAP. A simple email to the team or a posting on an internal message board kicks off the process. The message includes who will be consulted, an open invitation for any team members to contribute advice and the date the individual plans to present the results. Sharing results within one month is recommended.

The individual answers the following questions:

Step 4: Seek Advice from Others

The individual presents their self-reflection and seeks advice from at least three team members. Advice comes from those who receive a personal request as well as anyone who self-selects into the process following the initial announcement. This allows for contributions from any team member who believes they may have valuable input or may be impacted. The questions in step three can serve as good discussion starters.

Decision time. Taking all information into consideration, the individual decides what they think should happen next. This could include changing roles, altering the current role or even leaving the organization.

The individual shares the results of the process with his or her team by creating a summary document. The communication should include their personal reflections, advice received, thought process, decision, reasoning for the decision and transition plan.

In a fully self-managed organization, the final step is to execute on the transition plan. No further approvals are required. The individual driving the change is responsible for ensuring a smooth transition with his or her colleagues. Any significant changes in responsibility, compensation or employment status need to be fully documented before the change can take place. Compensation changes may require additional steps.

Experimenting with a Role Advice Process

If Fitzii’s process feels too radical a shift from how your organization operates, you can customize the approach to work for your culture. Start slow and test drive variations. The key is to shift responsibility of constructing an optimal role from manager to team member.

One easy way to try out the suggested process is to pick someone on your team who you believe is due for a role shift. Perhaps they are unhappy. Perhaps the business need for their role has expanded or dwindled. Introduce them to the process above and invite (but not force) them to give it a test drive. Remove the announcement step since the broader team doesn’t yet know about the process.

Work with your colleague to select a list of people to seek advice from. Have your colleague complete steps three through five. They can come back to you for step six once they’ve compiled a recommendation and together, you can finalize a decision. The final step can be adapted to your regular way of finalizing role changes.

Test it out a few times and see what happens.

Thanks again to the Reinventing Scale-ups authors for your useful and generous contribution to the self-management movement. We heartily recommend the book!

10 Surprising Things About Work Without Bosses
How our Team Meetings Went from Average to Awesome
Why our Purpose is Evolutionary
Confessions of a Company Without Managers (1 year later)
25 Powerful Books That Shaped Our Company
We Eliminated Management!... see what happens
Heartfelt Employee Love Letters
Three Tools to Unlock Wholeness at Work
0 replies