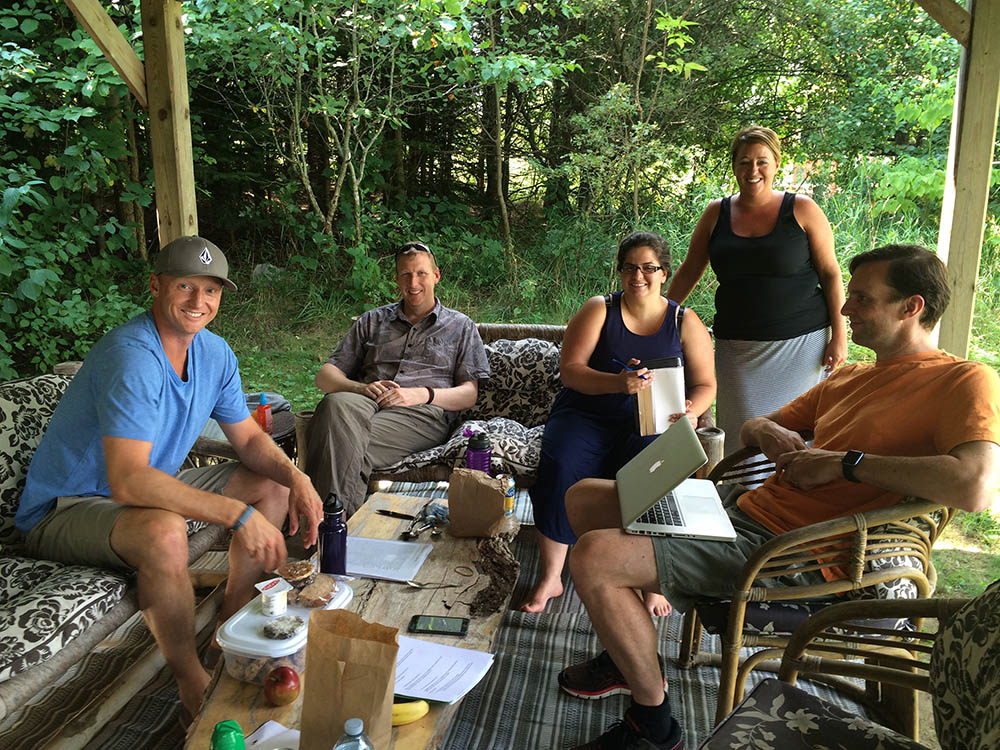 (Some of the team just before we reviewed our reviews)

“This was the best feedback ever. It was thoughtful, inspiring, helpful and full of love.”

– Fitzii’s BD Whiz after her review.

It would be fair to say that most company performance reviews fail to generate this kind of enthusiasm.

Yet I heard many comments just like this after we finished our first ever performance review process at Fitzii.

Since Fitzii declared ourselves free of managers in early 2015, we decided to replace the typical manager-to-employee performance review with a peer-review process.

We tried to come up with an approach to feedback that:

At Fitzii, whenever we have a task that doesn’t fall within a particular person’s responsibilities, someone volunteers to lead the charge for the team using an advice process.

When the question came up of how we’ll do performance reviews in our new self-management structure, I raised my hand to be the decision-maker and solicit input about how to create the best possible approach. That actually didn’t end up being very difficult because, unlike some of the other processes we’ve changed at the company, everyone had opinions on how we should do employee reviews.

They’re too one-directional, with the manager having all the power and the subordinate having little input. We chose a 360° peer format to address this.

They focus too much on the negative, or the flipside where people are afraid to bring up any negative issues. We structured ours to give some balance, with ground rules to keep the criticism constructive and judgement free.

They’re too structured, with a million questions on 5-point scales. We decided on a format that was loose enough that reviewers could emphasize the most important points while still mentioning other things.

Co-worker benchmarking creates competition, which can lead to distrust, demotivation and a lack of collaboration. 360° feedback and having no scoring helps mitigate this.

Reviews affecting salary creates anxiety, and encourages people to not be vulnerable and openly dig into weaknesses. There was definitely some anxiety leading up to our first-ever reviews, but there will be less next time, now that everyone had such a good experience.

How We Did Our Reviews

We chose to do a 360 peer review using the Small Improvements tool, where each person first completes a self-assessment of their past year’s work and then their peer reviewers read that and answer two basic questions: (i) what’s gone well and (ii) what might be improved.

Here’s the question we used for our self-assessments:

Assess your past year in terms of your accomplishments, important learning, and even mistakes that led to growth. Then tell us what areas of your performance you would particularly like to get feedback about.

Our objective with the reviewer questions was to give some direction and structure to the reviewer while still leaving it open for the writer to cover any topic.  There were two questions for the reviewer:

The final touch was an initial set of instructions and examples of how to give constructive feedback that will be well-received by the reviewee:

When reviewing, please be considerate and mindful of how the reviewee will receive your criticism.  Remember to speak in “I” language to share how you have been inspired, touched, hurt or frustrated (for example) as a result of what the other person has done – and not believing your impressions are objective truths about the person.  Some examples for inspiration:

Brenda, you are so good at making customers feel great. I remember the time you helped ABC company implement a new solution and they were so glad. It also helped our numbers that quarter. Way to go!

Brenda, you are really good at finding ways to save money. You might be able to do that more, maybe take on some of our budgeting or expense approval work.

Brenda, we haven’t made as much progress as we hoped with our new referral programs and it would be great if you could bring your attention to that next year.

Brenda, when you don’t finish your part of the report, I feel embarrassed submitting an incomplete report or I feel overwhelmed if I try to make up your part. How can we get our report submitted complete and on time?

We’re on a small enough team that it wasn’t too cumbersome to have each person give feedback to each of their coworkers.  As we’re growing, it won’t be practical for everyone to review everyone else, so we might look at more frequent reviews involving fewer reviewers, or limiting feedback to those who work closely together.

It’s also important to point out that a key idea in the self-management way of working is the need to give peer feedback continuously as it arises. While that’s good in any organization, it’s particularly important for us because there are no longer managers with accountability for their teams. It’s critical that everyone take responsibility for speaking up when they have concerns about how things are going or suggestions on how we could be doing things better – and not hold on to these things until formal review time.

We decided in advance that we would keep the reviews private so that people could be as honest and forthcoming as possible when writing them. We also decided we would do some sharing at our team offsite, which took place a few days after we received our feedback.

In the review of the reviews, each of us spent a few minutes summarizing what we heard, and what we’re going to do, followed by an opportunity for anyone in the group to add their thoughts. It felt totally open, honest, and constructive, and I would say it did more for team-building than go-karting or laser tag could ever do.

So we were pretty happy with our first attempt at doing performance reviews, and no doubt we’ll make some improvements in the next go round. If you’ve had good or bad experiences with performance reviews, we’d love to learn from you. Please share them with us in the comments below, or if you have questions or comments, don’t be shy to review our reviews.

25 Powerful Books That Shaped Our Company
The Good, Bad & Amazing of Six Months as a Self-Managed Company
Confessions of a Company Without Managers (1 year later)
Three Tools to Unlock Wholeness at Work
We Eliminated Management!... see what happens
How our Team Meetings Went from Average to Awesome
10 replies

How our Team Meetings Went from Average to Awesome Against All Odds: A Story of Hiring Success
Scroll to top